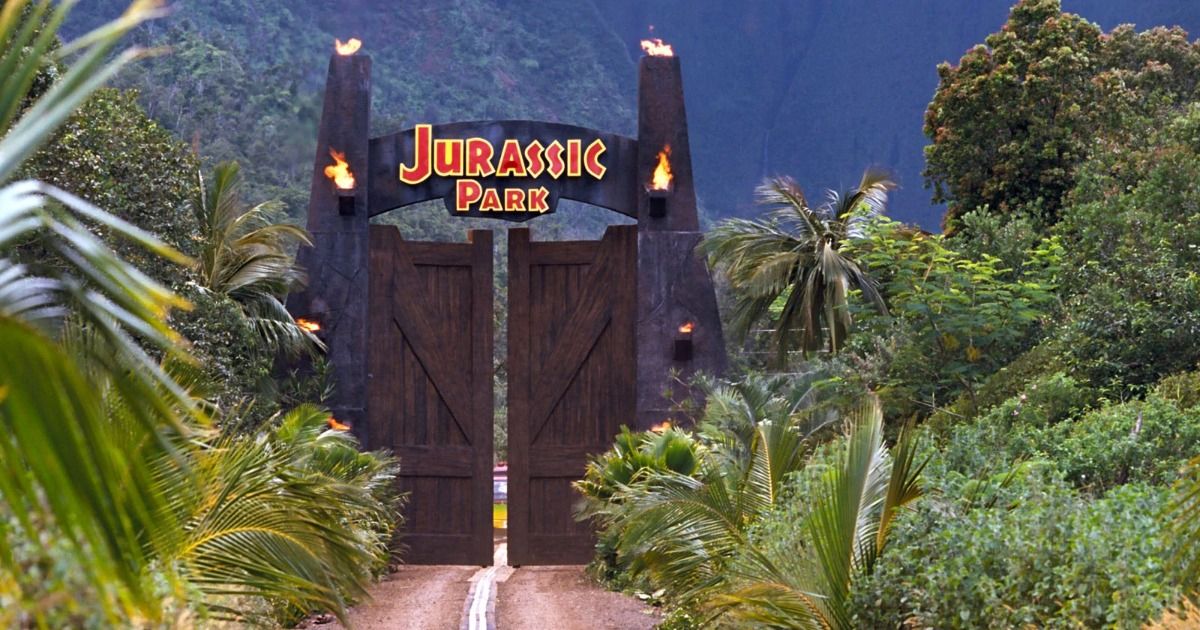 Steven Spielberg’s 1993 classic Jurassic Park, based on the book of the same name by Michael Crichton, is widely regarded as one of the best films to come out of the 1990s. It’s one of Spielberg’s best, and over the last thirty years the film has firmly solidified its place in both film history and overall pop culture. Whether it be the result of iconic moments like the steps of the T-Rex reverberating in a cup of water, or just the truly astounding charisma that Jeff Goldblum emanates in every scene he’s in, Jurassic Park really connected with people upon its release, and it continues to make waves today. It won all three of the Oscars it was nominated for back in 1994 (sound, sound effects editing, and visual effects), and the outstanding digital and practical effects of the film still hold up incredibly well, even surpassing those of many modern blockbusters.

The reign of Jurassic Park did not end with the first film, though. The success of the film spawned a number of sequels that, while some are certainly fun, have never really captured the same magic as the original. The first sequel, 1997’s The Lost World: Jurassic Park, even saw Spielberg return to the director’s chair, but the film was still a mere shadow of its predecessor. Jurassic Park III, directed by the ILM legend-turned-filmmaker Joe Johnston, continued this trajectory and furthered the quality gap between the original and its sequels. The series was then revived in the last decade with the Jurassic World trilogy starring Chris Pratt and Bryce Dallas Howard. This new take on the series transformed it into a modern blockbuster franchise complete with all the nostalgia and absurd action imaginable. Across all of these subsequent entries in the Jurassic canon, the question of why they haven’t been as good as the original has grown larger and larger. Here’s how the original Jurassic Park has managed to stay so far ahead of its sequels.

First of all, one of the key differences between Jurassic Park and its many sequels is how the film approaches its characters. While the many follow-up films, along with most major blockbusters, depict their characters as variations on the same caricatures of stoic heroes, vain businessmen, and the innocent people in danger, Jurassic Park takes a different approach. Each of its characters serves a key purpose in building the plot and commentary of the film. Some characters are still more heroic than others, but it isn’t as clear-cut and obvious as is in many similar films of the time. Looking at the lineup of characters in the film, it would seem that the role of the traditional action hero would be best filled by Goldblum’s Dr. Malcolm. He’s charismatic, smart, attractive, and pretty much everything you would imagine a lead to be. However, Jurassic Park makes Malcolm into a bit of a jerk, even if many of the funniest and most recognizable lines are given to him. It then further doubles down on avoiding the typical hero pitfall by taking Malcolm off the board the first chance it gets, as his desire to be a hero results in him being critically injured in the first major dino-event of the film.

The real heroes of the film are Dr. Grant and Dr. Sattler. Though they are both immensely likable, neither of them fits the mold of the traditional hero. In a typical blockbuster, they would be delegated to the supporting role of an expert scientist who probably gets taken out in the first act. However, the film instead chooses to have Grant and Sattler’s expertise and knowledge be what ultimately gives them the edge to stay alive. They are the non-traditional protagonists that bring a sense of realism to the heightened drama of the film. As they settle into their roles as the central protagonists, they don’t work their way out of situations with bravery and heroics (though they do still possess no small amounts of both), but rather with their intelligence and intuition.

Beyond Grant, Sattler, and Malcolm, many of the supporting characters also avoid the typical traps of the generic blockbuster. For example, Dr. Hammond, the genius behind the park, is not some mad scientist driven by the greed of success and glory. He could have easily been depicted as some rich tycoon driven solely by a lust for praise and financial gain, but rather he is a soft-hearted man who wants to provide a sense of excitement and awe to the world. Even with how flawed his plan for Jurassic Park may have been, Hammond is still a good person. He just failed to realize the critically dangerous holes within his concept.

More Than Just a Blockbuster

The entire Jurassic series is undoubtedly the definition of what it means to be a blockbuster in the late 20th and early 21st centuries. It is relentlessly over-the-top action mixed with an almost absurd amount of nostalgia-baiting (especially in the more recent films) and a general reliance on its overall “cool” factor to drive audience interest. While there’s no denying that the original Jurassic Park is a blockbuster thoroughly born out of the Spielbergian approach to filmmaking, the film has been able to stand tall for so many years because it isn’t defined by this blockbuster approach to filmmaking. There’s plenty of ferocious and awe-inspiring dino-action to satisfy the inner-child in everybody, but there’s more to the movie than that. Jurassic Park is also a genuine character-based drama with compelling societal and historical commentary that has aged like a fine wine.

It’s the situational intrigue and the ethical dilemma of Jurassic Park that has preserved the film so well over the last 30 years. The focus of the movie isn’t on the dinosaurs themselves, but rather it is on the hubris of humanity which led to their revival. It isn’t until over 20-minutes into the film that the first dinosaur actually appears on-screen, and after that, they disappear again fairly quickly. The film immediately moves back into various conversation-pieces about the ethics of the park. Aside from the newly hatched velociraptor and the sick triceratops, it isn’t until the film reaches its half-way point, an hour in, that the dinosaurs reappear in any dramatic sense. This occurs with the first introduction of the T-Rex, as it breaks loose of its enclosure and causes the first violent encounter of the film.

From there on out, the film is a swift ride of survival, throwing its characters from one dangerous situation into the next. However, nearly the entire first hour of the movie is spent developing its premise and asking its characters, and the audience, tough questions about the morality of it all. The film presents its questions about humanity and its right to recreate life in an almost hypothetical way, as all of those conversations all take place far away from any danger. It makes its characters and viewers consider how they feel about the situation before it violently confronts them with the reality of it all. In doing so, the film is actively having a conversation with its viewer, answering every question and consideration with the brutal indifference of nature toward humanity. The dinosaurs don’t have some vendetta against the human characters; they are just animals doing what they are naturally predisposed to do.

Related: Jurassic Park: Has the Dino-Centric Franchise Ran Its Course?

It Set the Bar High

The care and attention to detail put into the characters, story and thematic material of Jurassic Park certainly set the film apart from the half-dozen sequels that have followed. It’s a film that stands well on its own, and even Jurassic World director Colin Trevorrow has expressed doubt over whether any sequels should have been made in the first place. However, one of the biggest reasons that the sequels have never touched the quality of the original is precisely because of what they are: sequels. That’s not to say that a sequel can never be as good as its predecessor; there are loads of examples that prove that idea wrong. The Jurassic Park sequels, however, had all the wrong takeaways from the success of the original film.

The dinosaurs in Jurassic Park are incredible, terrifying and immensely exciting, and it is that aspect of the film that the many sequels have put so much effort into replicating. In doing so, they haven’t taken the time to uphold the ideas that have kept the original film so separate from the majority of blockbusters. Starting immediately with The Lost World, the series immediately fell into almost every cliché imaginable. There’s no doubting Goldblum’s pure on-screen energy and presence, but making Malcolm the lead of The Lost World flew in the face of so much about what made the first film work. That, in conjunction with the film’s over reliance on the “Dinosaurs are cool” factor, resulted in a steep decline in quality with The Lost World, which is often considered to be one of Spielberg’s worst.

Jurassic Park III continued that decline, as it essentially felt like little more than a cheap knock-off of what the franchise had once been. The overall shift in the franchise toward a generic blockbuster series was completed with the soft reboot of the Jurassic World series. As fun as those movies can be, they are jam-packed with ideas that have been seen time and time again. All three films are immensely reminiscent of pretty much every other major blockbuster of the 21st century. They are a flood of modern action clichés without any of the nuance that defined the first Jurassic movie. They tried to recreate the sense of excitement and awe that came with seeing dinosaurs on-screen in the original film, but they forgot to bring any of the depth and character-work with it. Ultimately, with each passing entry in the Jurassic franchise over the last few decades, the series has become increasingly hollow and devoid of meaning. Yeah, dinosaurs are cool, but a film doesn’t work solely because it’s cool. Quality character and story are essential to any film, and the original Jurassic Park is the only entry in the series that seems to have known that.