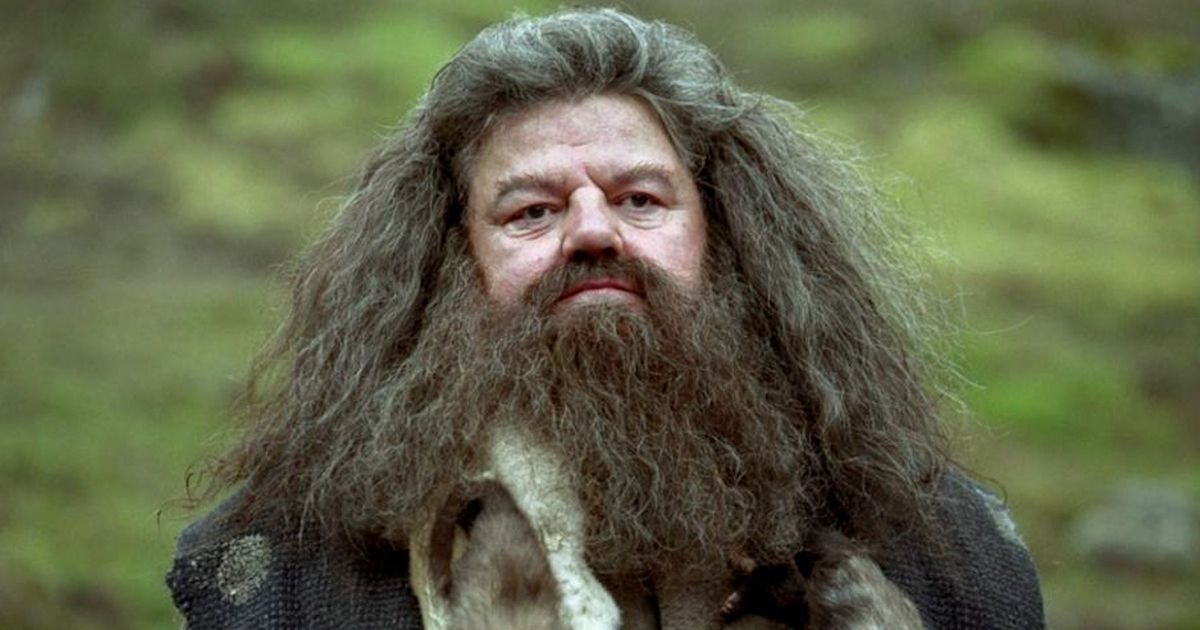 In mid-October, Robbie Coltrane, the actor who famously played Rubeus Hagrid passed away. As Harry Potter fans and actors alike mourn the loss of the beloved actor, Coltrane will forever be remembered as the Hogwarts Keeper of the Keys and Grounds turned Professor of the Care of Magical Creatures.

Hagrid is one of the first three characters audiences meet in the Harry Potter films. He brings then-infant Harry to his aunt and uncle’s home in Little Whinging on the request of Hogwarts Headmaster Albus Dumbledore. He is also the one to retrieve Harry for his first year at Hogwarts. During Harry’s time at Hogwarts, Hagrid is one of the adults who actually protects Harry. Indeed, Hagrid’s father-like devotion to Harry is just one aspect of his big heart. Between revealing things that ought not to be revealed and loving seriously misunderstood creatures, Hagrid is truly a character deserving of praise.

Upon meeting Hagrid for the first time, he is tearful over leaving Harry with his Muggle aunt and uncle. Far away from the wizarding world, Harry (Daniel Radcliffe) grows up in an abusive household. When letters by owl begin arriving in the thousands, Harry’s aunt and uncle take a holiday on an isolated island, where Hagrid blasts down the door and hands Harry a homemade birthday cake. Up until this moment, Harry had never been shown any kindness. The birthday cake is more than an act of love from Hagrid, but a symbol of his care for Harry. It wouldn’t be presumptuous to assume Hagrid may have made a cake for Harry every year thereafter.

Throughout Harry’s time at Hogwarts, Hagrid’s presence often means a catalytic event will occur. For example, in many of the Harry Potter films, being with Hagrid in his hut are precursors to a major truth being revealed. One of the biggest truths revealed in the hut was when Harry persuaded Professor Slughorn to be brave and reveal a damning secret. The synchronicity of Hagrid being a catalyst of the truth is the crux of Harry’s journey: layers of the truth about himself and his parents’ tragic deaths. In revelations, it’s natural to share them with someone who feels safe. A scene in Harry Potter and the Deathly Hallows Part 2 is a reference to the book, as Entertainment Weekly confirms, where Hagrid is captured by Death Eaters and when Harry enters the Forbidden Forest to die, Hagrid is there to not only witness the murder, but forced to carry Harry’s body back to Hogwarts. While Harry had many father-figures at Hogwarts, Hagrid was the one who cared deeply for him — not as a means to an end or for who his parents were, but for who he was as an individual.

At the beginning of Harry’s third year, Hagrid is announced as the new Care of Magical Creatures Professor as the previous professor had retired. Many teachers, whether they felt called to the profession or became a teacher for other reasons, can feel nervous on their first day. Of course, these nerves are calmed when the beaming faces of students, who are just as nervous, greet you. Hagrid has known several generations of students, but only as the keeper of the keys and grounds, a historical role as many shelters, like castles, typically had one key for the entire property. Since Hogwarts is a magical castle, it’s safe to assume that the keys were for doors that were not enchanted, like the dormitory entrances which required a password.

In his role as a professor, Hagrid remained just as responsible for the students he encountered as well as the magical creatures he would show to his students. During his first day, Hagrid introduces Harry to Buckbeak, a hippogriff. After a return flight, Draco Malfoy (Tom Felton) forces his way towards Buckbeak who scratches him. Hagrid is unlike other professors; he isn’t strict like Professor McGonagall or callous like Professor Snape. Hagrid sees his students like he sees each magical creature: seriously misunderstood. The way he establishes rapport with his students is through empathy, a surefire way teachers in the real world connect with students, as Watermark Insights details. Showing empathy is how Hagrid allows his students to feel uninhibited in his class, even if some feel entitled to attention like Malfoy who isn’t punished by Hagrid but is shown compassion.

One of Hagrid’s catchphrases is that each creature is seriously misunderstood. As a student at Hogwarts, he acquired an acromantula whom he named Aragog. He adopted Fang, a Neapolitan Mastiff, and Fluffy, a three-headed Staffordshire Bull Terrier, sometime in between his time as a student and taking his post as Keeper of the Keys and Grounds at Hogwarts. Finally, he acquired a dragon egg before Harry’s first term in Harry Potter and the Sorcerer’s Stone. Practically each creature in Hagrid’s care was feared considering the three aforementioned creatures have the ability to hurt humans.

Hagrid’s love and adoration for magical creatures rivals even that of Newt Scamander’s, the author of Fantastic Beasts and Where to Find Them, whose suitcase was a functional warehouse for magical creatures in the Fantastic Beasts films. Hagrid’s best magical creature moment in the franchise is during Harry Potter and the Goblet of Fire when he falls in love with a half-giantess, Madame Maxime (Frances de la Tour), who loves animals just as much as he does. When Harry is a contestant of the Tri-Wizard Tournament, Hagrid and Madame Maxime go on a date to see the dragons for each contestant, while Harry wears his cloak of invisibility. Hagrid isn’t afraid of the dragons, but he isn’t as eager to approach as Madame Maxime.