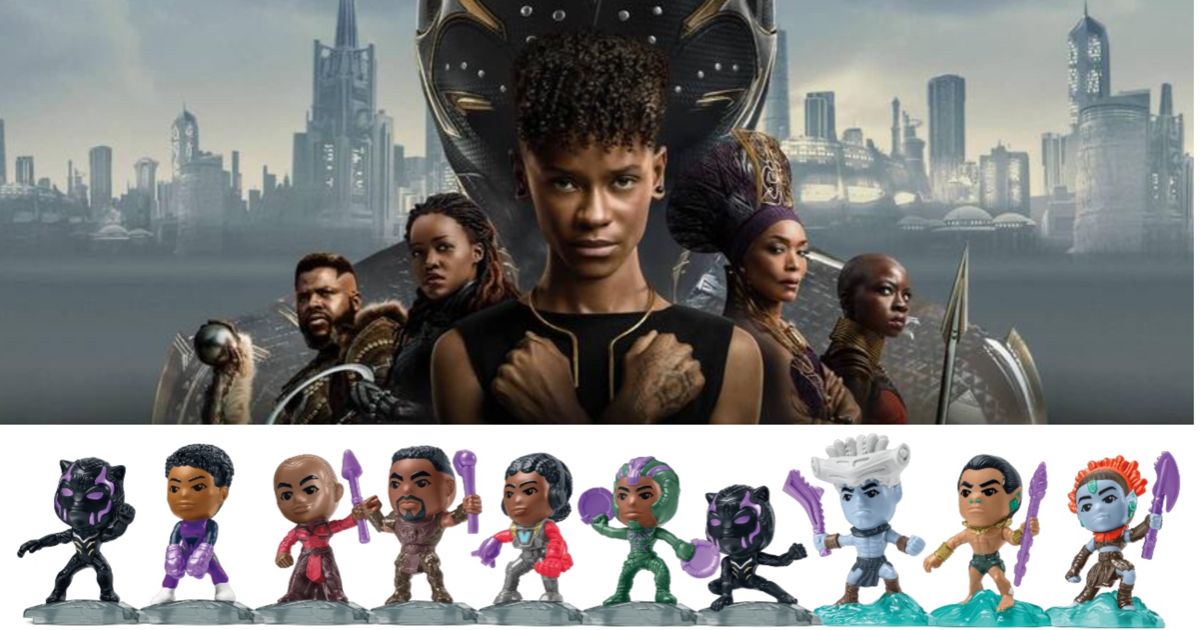 In advance of the release of the highly anticipated sequel Black Panther: Wakanda Forever in theaters on Friday, November 11, 2022, Happy Meals featuring Black Panther toys are available at participating restaurants nationwide beginning on November 1st, 2022. Just like the Halloween Pails, all ten of the Wakanda Forever toys are sure to go fast, and given that they’ll only be available while supplies last, you may want to consider planning a trip to your closest McDonald’s sooner rather than later.

The ten Wakanda Forever toys featured in the lineup are headlined by two figures depicting the titular Black Panther in two different poses. Naturally, the returning characters will be well represented, including Shuri (Letitia Wright), Okoye (Danai Gurira), M’Baku (Winston Duke), and Nakia (Lupita N’Yongo). Also included in the new Happy Meal set are the two major characters that will be introduced to audiences through the new film (but who are sure to become fast fan favorites): King Namor (Tenoch Huerta) and Riri Williams, A.K.A. Ironheart (Dominique Thorne). Also present are two of Namor’s allies from Talocan, who are visible in the trailer.

McDonald’s collection of Wakanda Forever figures will follow the format established by previous Marvel Studios Happy Meal releases. This means each character sits on a base that features a design inspired by their role in the movie, with the seven Wakanda-based characters on a gray base and the three Talocan-based characters on bases that call to mind the ocean waves. When a button on the base is pressed, the character will move their arms, mimicking their signature attacks from the movie.

In addition to the Wakanda Forever toys inside the box, the Happy Meals will also feature a special box depicting the design of the new Black Panther uniform.

In a quote included in the press release, VP of U.S. Marketing, Brand Content, and Engagement at McDonald’s Jennifer Healan said, “The first Black Panther movie inspired a new generation of Marvel lovers – and that’s because of the powerful story it told, brought to life by an incredibly talented cast. It set a whole new standard for representation on the big screen. And now, we’re excited to bring that experience to our restaurants and help fans see and celebrate their inner hero with this new Happy Meal – because seeing is believing.”